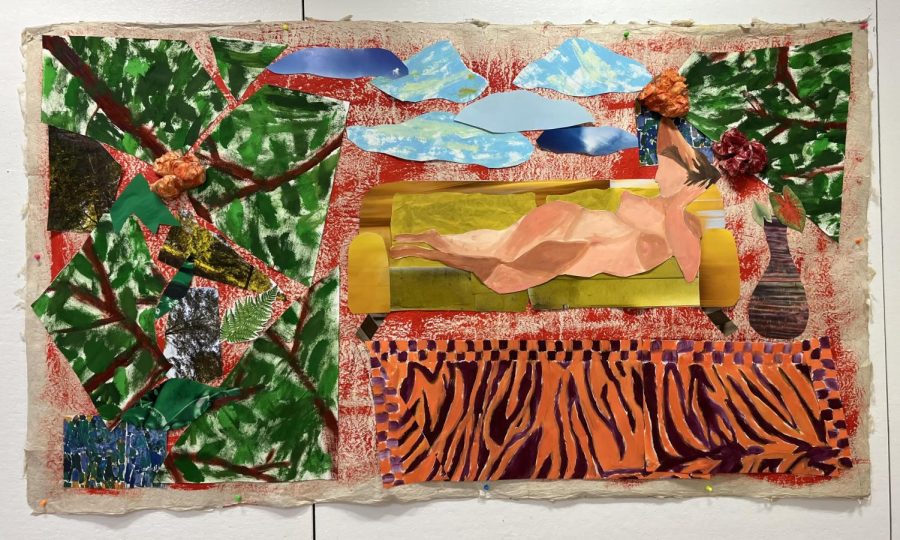 Growing up as the daughter of two artists, Lily Scofield ’22 was always exposed to art as a little child. Whether it was visiting an art museum or taking an art class, art was naturally an important aspect of her life before Kent. Even at an early age, she learned to have an appreciation for it. However, it was not until her sophomore year at Kent that Lily truly discovered herself as an artist. For the first time, Lily had the opportunity to express herself and dig deeper into her passions as a young artist.

Interestingly, it was a history project which had allowed Lily to spend time in the studio and get her engrossed in art. During the “passion project,” Lily spent a huge amount of time over two weeks in the studio recreating one of Picasso’s paintings, “Jacqueline with Flowers.”

After feeling engaged in working in the art studio, she progressively put more time and effort into art. As a senior this year, she plans to further enhance her experience and abilities in art by taking Advanced Studies Oil Painting. In the fall, she enjoyed afternoon studio art with Mrs. Brody who has been important to Lily as both a teacher and a mentor.

Out of all of her outstanding artworks, Lily is most proud and appreciative in her piece called  “Nature Heals,” a collage that is hanging in Hoerle Hall. Lily was inspired by Mickalene Thomas, a contemporary African American visual artist. This artwork illustrates a detailed scene of a woman laying naked on a couch while surrounded by nature. The large-scale collage, which required a lot of time and patience to create, incorporates both paintings and photography.

For any beginners in Art, Lily advises that an open mind and faith in yourself is all that is needed to be successful. She says, “My advice is to trust the process and stick to it. It can be so frustrating when your work doesn’t represent the picture you imagined in your head, but if you keep pushing yourself and working on it you’ll get something you’re proud of. Everyone is capable of creating good art. An open mind is what you need to succeed.”

Just like other talented artists, Lily Scofield is a role model for many who want to step out of their comfort zones and challenge themselves artistically.