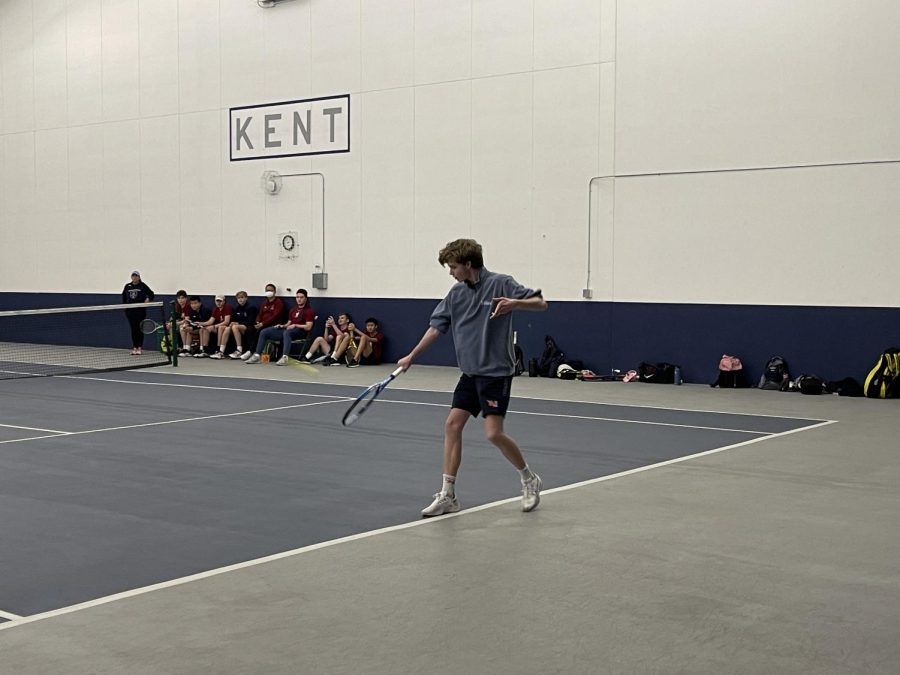 Despite the gloomy weather on Saturday, April 9th, Kent Boys JV Tennis played an intense game against Avon Old Farms School in the indoor tennis court. Given that this is their first game, our players started the season strong with a victory of 5-2 and are looking forward to keeping the trend going.

Due to the limited number of indoor courts, four games were played at a time. With the team divided into singles and doubles, each singles is worth one point, and the winner of the majority of the doubles matches gets another point. Kent remained undefeated in the first three singles games played by our number 1 player Robby Ober, number 2 player Keshi K., and number 3 player Jack Wu.

Though it seems like Kent is dominating the game, scores of those matches were extremely close. According to Jack Wu, who won his game 8-6, his opponent is “very consistent, always hitting the ball back.”

Avon’s team further proved their strength by winning the following two single games, in which they scored 8-4 and 8-2, bringing the big scores to 3-2. In the last single game, our number 6 player Aaron Guan won the game, elevating the score to 4-2 with Kent leading by 2 points. Although doubles matches don’t value as much as singles, Kent maintained its dominance by winning all doubles matches, contributing to an additional point.

Mr. Close, head coach of Boys JV Tennis since 2019, congratulated his players and commented that this victory is a good start of the season. Nevertheless, there is still room for improvement, as he noticed a lot of issues of consistency when hitting some hard shots from the baseline. In the coming weeks, he looks forward to helping his players improve their consistency through practicing more and developing some spinning skills.

Although there are things that are out of his control, Mr. Close enjoys working with his players to help them improve their skills. No matter if it is a win or a loss, he always helps them find out the reasons behind and is proud of his players as long as they are doing their best. Mr. Close finds coaching meaningful as his players are able to learn life lessons that can be applied beyond sports and show sportsmanship on the court, “making a match a good experience for both parties”. “What I like about our team are my friendly teammates, the supportive atmosphere, and the healthy-competitive environment,” said Jack Wu.