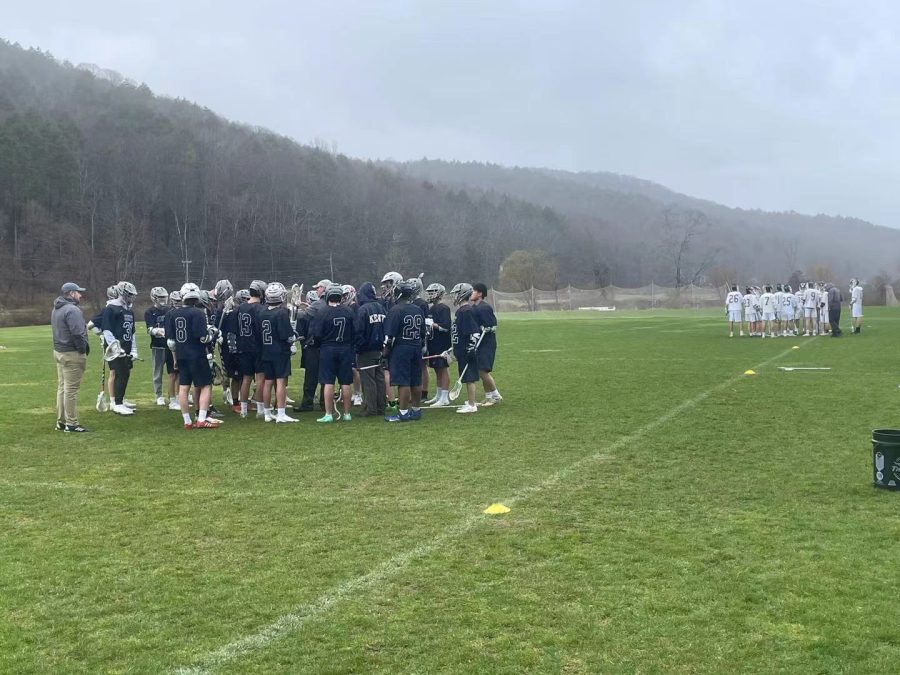 The Sunday rain did not stop the JV Lacrosse boys claiming their first victory against rival Choate Rosemary Hall. With passion, faith, and joy the boys stroll on to look for further success in the league this year.

It was not an easy game as the Choate lacrosse team kept it tight until the fourth quarter. Kent sealed the first quarter with a comfortable 2:0 lead, but Choate caught up by scoring their second goal in the third, elevating the score to a 3:2 with Kent only leading by a point. However, Kent finished the job by scoring three goals in the fourth quarter, sending Choate home with a 7:3 defeat.

Head Coach Mr. Clarke commended the great job from the team. For many of them, they were not experienced in lacrosse, so he was very pleased with how the team played with fundamentals in the match consistently. “Everyone contributed a role in the team, and we play as a team,” said Mr. Clarke. This is especially true since this year, 3rds and JV lacrosse were combined together to train, and sometimes even play games together.

When asked about any specific improvements about the team, Mr. Clarke said he wanted players to develop fundamentally important skills in lacrosse, such as catching, throwing, and attacking awareness. He felt that the team is more defensive-oriented, but there is substantial potential from the attacking forces and they will release them once they learn how to play the game more. Mr. Clarke emphasized that the JV squad is “always improving mechanically, and there are a  lot of aspiring players who could potentially become players of the more competitive side of lacrosse.”

With their first win, there is huge potential for a good league run from the JV lacrosse boys. Mr. Clarke thought that the team had immense potential, most importantly equipped with great spirits ready to play each match with passion. “ We can have a good season, but we don’t really care about wins or losses,” Mr. Clarke said,  “I think at our level it’s more about having fun and enjoying ourselves, and that is exactly what we’re doing right now.”