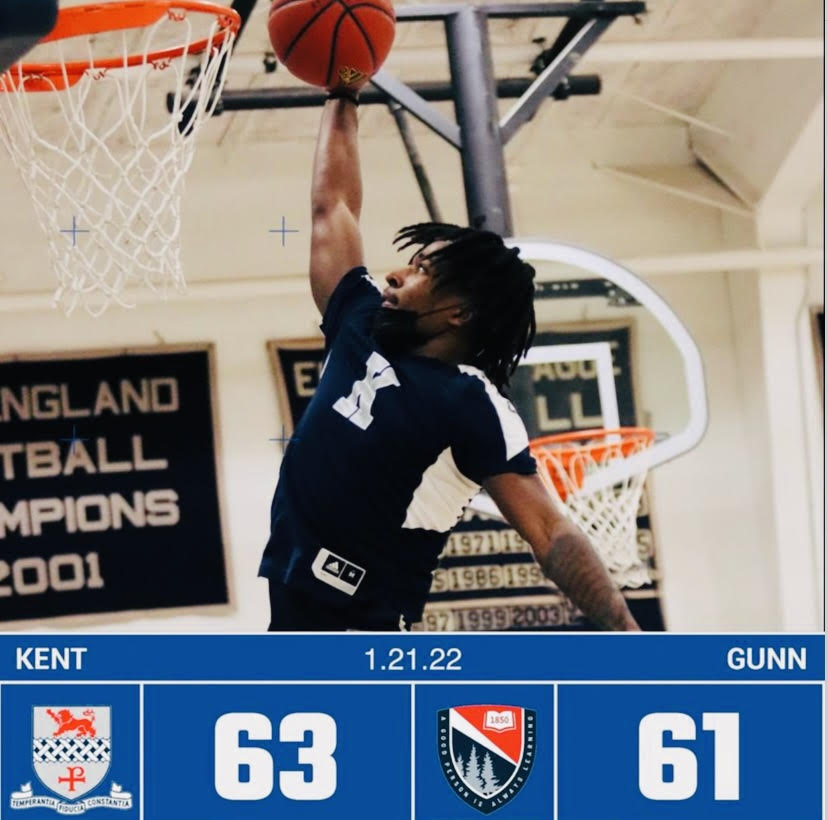 After a long wait, the Kent varsity basketball team obtained their first win against The Frederick Gunn school with a Friday night buzzer-beater made by PG Keith Mency. Both schools had zero wins, but that record had to change, and thankfully the game ended in Kent’s favor. It was an energetic game, both teams fighting for every rebound, every possession, every point.

The game started with fast offenses from both teams, moving the ball quickly, and taking a lot of three-point shots. By the end of the first five, Kent was already winning by six points, 16-10, thanks to two three-point shots made by Ben Michaud Bang ’22 and good penetrations by PGs Jack Wallace and Mency.

The intense game continued with more defense and better movement of the ball. Coach Lee was focusing on the defensive rebound as the Frederick Gunn School had very tall players who could play center and forward positions. Time kept running from the clock, and Kent reached halftime well ahead at 38-24.

During the half, the team talked about being focused on defense and playing smart. However, The Frederick Gunn School came out to the second half harder, trying to steal a win that would allow them to obtain their first.

They started to play solid basketball, not allowing Kent to take good shots or complete their plays. After 14 intense minutes, the game was close, with only a three-point advantage for Kent (57-54). A fast break from Kent leading to a layup from PG Peter Berg led to a five-point lead with 1:36 minutes remaining, which made the crowd believe that the game was decided.

Nevertheless, The Frederick Gunn School managed to equalize the game with 3.6 seconds left. Coach Lee took a timeout and gave the players the instructions to perform a good play. He yelled “Flat 2”, and two good screens from Perg and Teddy Schonbrun ’23 allowed Mency to receive the ball at the baseline. He drove to take a mid-jumper floater that went in and determined the game. Fans cheers filled Gowan Court as Mency brought the team their first win.

Asked what enjoyed the most about being a coach at Kent, Coach Lee responded that it was “being able to teach and mentor young men at a much earlier stage of their development. It is very rewarding to work with young men who are so willing to be coached and so appreciative of the opportunity to learn the right way to play the game.”

Coach Lee has been the coach for the Kent Varsity basketball program for four years and has experience with multiple players that have arrived at Division 1 colleges. He is a skilled coach that has worked as an assistant coach at the university of Marist. He will undoubtedly develop more players and make the Kent Varsity program a competitive team at the founders league.