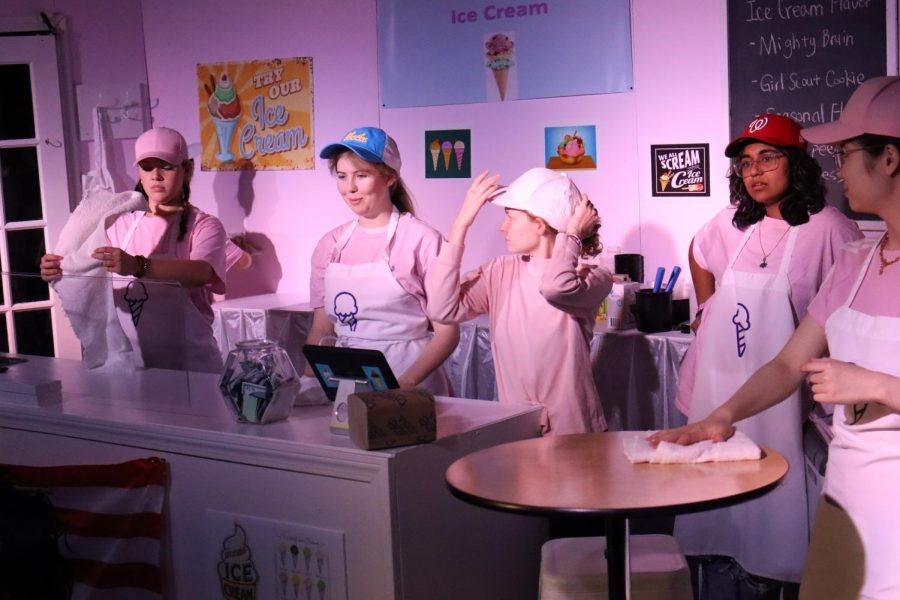 On the final weekend of the 2021 Fall Term, the Kent community watched the world’s premiere of Rocky Road by Danielle Mohlman in our Acting Studio.

The play is about a group of high school seniors who spend their last summer working at an ice cream parlor before heading off to college. “It’s about the difficulties the kids have saying goodbye to their friends and their hometown as they move on to the next stage of their lives,” says Mr. Stewart, who directed the play.

Written in 2019, the play was commissioned for a Virginia high school’s play festival, but with the pandemic cancelling the show, Kent’s Theatre Program took up the opportunity to put on this brand new play. The cast had several Zoom calls with the playwright, once at the start of the term and another the week prior to the show, discussing small details and customizations to the production. The students offered suggestions and customizations to the script, making sure every detail was immaculate and fitting. “With a brand new play, when we’re developing the first production, you have a lot more opportunity to develop it,” Mr. Stewart said. While in most plays students can look up past performances for reference, this year the cast are challenged with creating the first version of the characters. It’s described as a “good challenge,” as the students will “have ownership of the character,” being the first actors who’ve adopted the role.

This play was chosen not only to match the gender ratio of the activity students but also because the themes of starting a new chapter in life are very relatable to the cast members. Another great element of this production is the representation of LGBTQ+ community, which many cast members feel very strongly about. “It’s not only fun because of the high school setting, but also, for many of my actors, the roles are relatable to who they are in real life,” says Mr. Stewart.

The actors loved their roles in the play. “It’s a great group of people and faculty helping us,” says Alden Lineberger ‘22, who played Molly. “It’s always a really fun time. I’ve been acting since forever, and Kent School Theatre always picks such great plays.” Anne Henderer ‘23, who played Hannah, learned many things from her role: “I’ve learned what civil disobedience and a true rebellion should look like, how to be a good public speaker and leader, how to engage an audience, and how to think abstractly through various subjects,” she says. She describes her experience as absolutely fantastic.