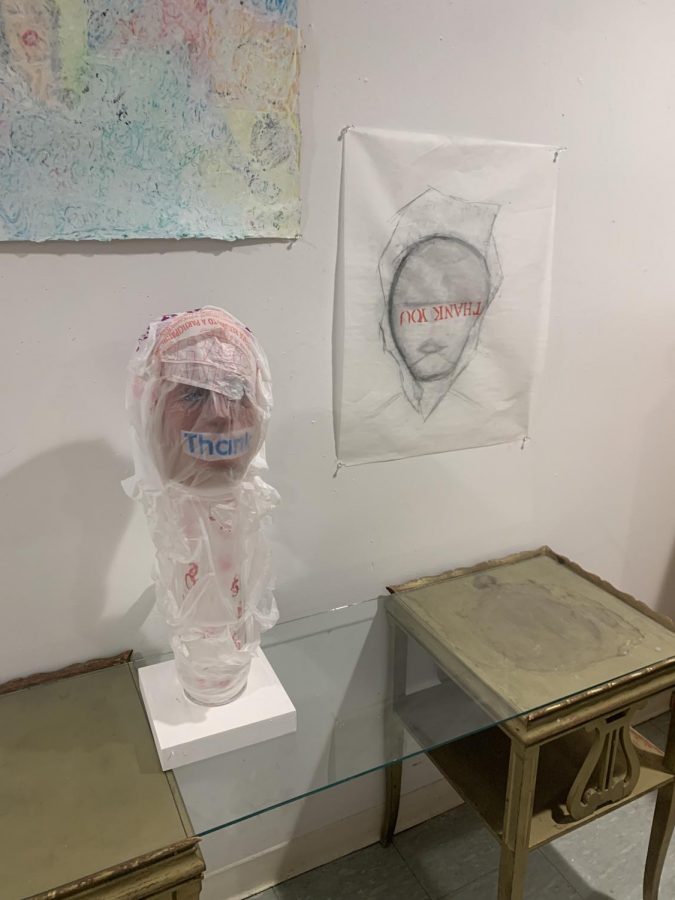 Formally introduced to art in middle school, Jackson Smith ‘22’s art teacher helped him discover the wonders of art. “I had a teacher who helped me really get engaged with it,” Jackson said. “She opened up to me what art could really be.” When asked about his inspirations, Jackson mentions several renowned artists including painters Jasper Johns, Georgia O’Keeffe as well as Banksy. “ [My inspiration] is changing all the time, just because I go through different phases with my work,” Jackson says.

Jackson is currently working on an independent study with Ms. Lynch on the subject of consumerism “and how it affects not only the art world, the fashion world, and also everyday life.”

His first piece so far is a 3D styrofoam mannequin with a plastic bag over it with words on the head. Jackson comments that “it’s overall theme is that these corporations are ‘consuming’ the person.” Though not his favorite work, Jackson thinks that it is a “crucial door for me to start working with a bunch of stuff.”

On the topic of why he’s so interested in art, Jackson says, “I’m obsessed with the creative process when it comes to art and I love to experiment and find new ways to do it.” Out of all the media he’s worked with, Jackson says that he loves painting the most. “[Jasper Johns] is someone that I’ve discovered recently and he introduced me to the wide variety that most established artists have. If one piece or one form of art doesn’t intrigue you, there are still plenty of other things that the artist can have.”