The Game of Tiaras: The Fall Play Presents a Fun Challenge in Pandemic Times 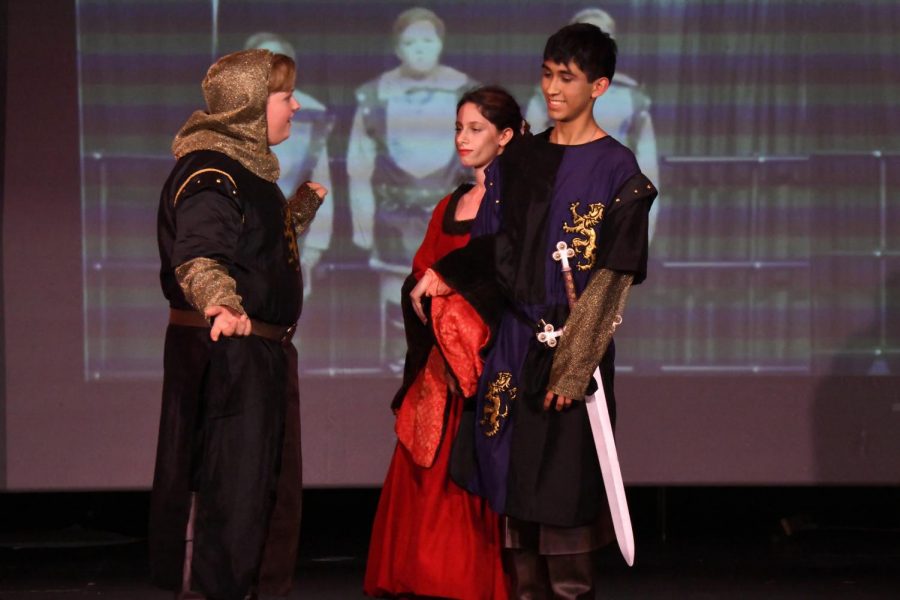 On November 6th, 7th, and 8th, at 7:30 pm sharp, socially-distanced audiences in Mattison Auditorium and online audiences in front of their laptops waited for the show to begin. The ongoing pandemic makes the production for the fall play – The Game of Tiaras – a fun challenge for Mr. Stewart and the cast and crew, on-campus and remote.

The Game of Tiaras is a satire based on Shakespeare’s King Lear, with a touch of Disney Princesses and Game of Thrones. Don Zolidis, the playwright, has made an online version of the play over the summer. Kent adapted some parts of the online scripts into the live version, including the popular and entertaining “blood-pack guy” played by Donovan Martin ’23. Like other online learners, Martin’s videos are pre-recorded and projected onto the screen behind the stage. “It was really fun to do the filming and it was nice to be able to try different things and do multiple takes to get the perfect shot,” said Martin. Remote senior Jason Li’21 who played “narrator 1” took up the leadership role in the production and described his experience as “different” but “turned out well”.

Speaking of the technical parts of the play, Mr. Stewart notes that “Working out all that stuff is really fun. Working out the character choices—Taehan’s accent, coming up with the idea to use the gigantic throne for tiny little Gage. There are many fun ideas that we came up with as we went along that were fun to integrate into the final show.”

Though COVID presented some challenges, there are positive sides to putting on a production during the pandemic. “Many people have told me they’ve watched the online stream. We’re not usually given permission to broadcast our shows, but because of the global situation, the publisher of the play encouraged us to do so this time,” said Mr. Stewart. In this way, closed campuses have the chance to share their work with the outside world.