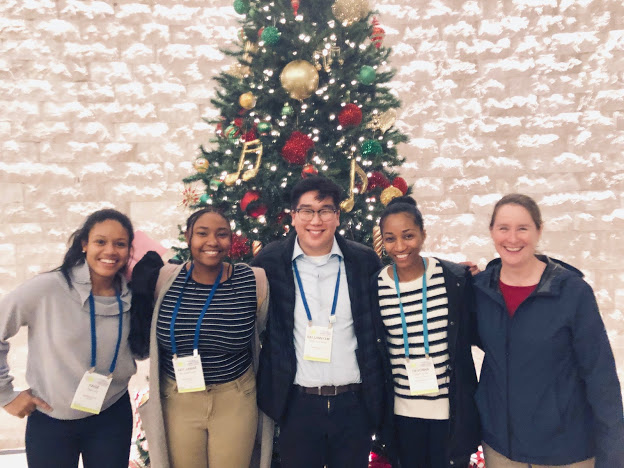 On the brisk, snowy morning of departure, I didn’t really know what I was getting myself into. I knew that I was going to represent Kent School in a conference about diversity, but there was not much else information given. Nevertheless, my excitement for the conference gave me the chills, like the delicate snowflakes that fell upon my head.

The conference started off with a “BANG.” When I say “BANG,” I mean multiple “BANGs,” as we were greeted with a blaring marching band that paraded through the aisles, with flashy dancers doing flips on stage. The energy and enthusiasm were unlike any other experience. After a warm welcome from the mayor of Nashville, we were then greeted with our opening speaker, Lisa Ling.

Lisa Ling is a journalist and author who is currently the executive producer and host of This Is Life on CNN. Ling shared her experience as an Asian American in the news, being inspired by Lucy Liu as a teenager, and her experiences while reporting in other countries. Aay-Janae Taylor ’21 comments, “what resounded with me the most from her talk was about how she helped other kids, especially when she visited a prison reform. She talked about how in some countries, prisons allowed kids to stay with their parents so that they weren’t separated. This alone dropped crime rates, and I felt like it was something we could bring here to America.”

After our chaperones headed out to the People of Color Conference (PoCC), we, the students, participated in an eye-opening activity known as the silent movement. In a room full of strangers, students were asked to stand when they heard the label they identified with read aloud. These labels were drawn from seven main cultural identifiers: race, sexual orientation, gender, family structure, social economic status, religion, and ability. As a gay Asian American of a lower income family, my heart started to race when I heard what we had to do. It was hard to put myself in a vulnerable situation and stand up where I belonged.

As the different identities were called out, I noticed that there were a mixed group of emotions. Like me, many had their heads hung low with their sleeves pulled over their hands, as they claimed their label in a room of 1,600 strangers. On the other hand, many got on their feet, like the singer Gloria Estefan, and looked extremely proud to claim their identity. These reactions stuck with me and I learned that I shouldn’t be afraid of showing who I am and putting myself out there. This was a reoccurring lesson that I was tested with throughout my time at the conference.

On the second day of the conference, there was a talent show. Students had the option of entering their names and sharing their hidden talents. And, truly, there were a wide array of different performances put on–spoken word poetry, musical performances of “Rise Up” by Andra Day, and even a Brockhampton song. From flips, an 80’s workout video, to a Native American dance, I was amazed by the sheer confidence, as well as pride, these students had.

Immediately following the talent show was a session with Keynote Speaker, Christian Picciolini, a former white supremacist. He shared what he used to do and what he does now. When I heard his introduction, I was shocked. I couldn’t believe it. Never had I ever listened to what a white supremacist had to say, and I was reluctant to give him a chance.

“I felt like he was a good guy,” reflects Aay-Janae Taylor ’21, “despite his past of committing hate crimes against specific groups, I could tell that he now has good intentions, by sharing his story and working to help white supremacists change their ways.”

As a liberally biased person, it’s hard for me to listen to what the far right has to say and where they come from. But after his presentation, I learned more about the importance of listening and understanding the other side, instead of just throwing your ideas towards the other.

Through these learning experiences, what I probably took away the most was the connections that I made with people. Meeting people in the breakout groups and listening to their different stories made me understand what others go through, to a greater extent. Many opened up about their stories and the hardships they’ve experienced from where they’re from. Just hearing them make themselves vulnerable triggered a sense of understanding; what people go through is not what it seems.

Not only did I learn about the experiences of others, but I also connected with people who were similar to me. There was a block of time where we would separate into affinity groups of our choice. To my surprise, there were a lot of groups that people could join. Along with typical ones, such as Asian American, Black, Latinx, and white, there were also transracially adopted, multiracial, LGBTQIA+, and many other groups. I went to the affinity group for Asian Americans and instantly became close friends with everyone I talked to. It just felt so great to connect with people similar to me, no matter where they came from.

This year was the 25th year of Student Diversity Leadership Conference (SDLC), so the different breakout groups that we were split into were named after donors and special friends of the conference. The group I was placed into was named after Justin Carr, an attendee from a few years ago, who passed away a few months after the conference. After his passing, his mother sent a letter to the organizers of SDLC, and said that the conference changed his life and impacted him in a positive way. She thanked them. I don’t think that it was a coincidence that I was placed in this specific group. It’s been a few weeks after the conference and I still reminisce and long to be back in Nashville, TN. I keep in contact with a lot of the friends I’ve made and we help each other with any problems that may arise.

I would urge everyone reading this article, regardless if you’re a faculty member or a student, to come to the next PoCC/SDLC conference in Seattle later this year. Whoever you are, however you’re born as, or however you identify as, there’s always a space for you. It was an incredibly positive experience for me, and I’d like to share my story with everyone firsthand.